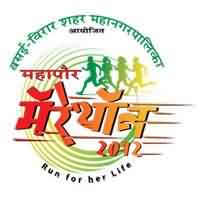 “Started in year 2011, This is the 6th successful year of Vasai Virar Mayor’s Marathon (VVMM) of 2017 will starts at Virar, Far North city suburb famously known as Vasai-Virar location (Thane / Palghar District / Mumbai Suburban) with total of 3 stations including Nalasopara in middle, dated December 2017. A Multi-Motto marathon pulls thousands of locals and inter-state runners (Including NRI’s) which together runs for creating awareness and promotes ‘Save Girl Child’ and ‘No Pollution’, Balancing Nature and Environment and Sure this time ‘Clean Green City’. Organized by Vasai Virar City Municipal Corporation VVMC (Now VVCMC) marathon attracts runners of all age and categories like Men, Women and Children above age 18. The Run has 3 major categories every year which are Full Marathon, Half and 11 Km special..”

This year 2017 the marathon will be held in December like past so many years. Dates will be updated soon as received.

This year, Marathon date is around 11th December 2016. A teaser to encourage, welcome and be the part of Marathon is out (See video below).

Media and Other partners like Radio City FM, Inda Bulls Home Loans and many others support this event. So don’t miss the fun to run.


Kindly Note : Every year details like race routes, Km, Prize etc changes, Below is from year 2014.

Started in 2011, when Shri Rajiv Patil (Also Known as ‘Nana’ between locals) was Mayor of Vasai Virar taluka. As he said then, the concept of promoting talents and athletes in various sports activities is always supported by ‘Virar Vasai Municipal Corporation’ (Then Called ‘Nagar Palika’). Since about 20 years now, Such sporting fresh and on going talents are showing their specialty via the Virar Vasai Kala Krida (A Local Sports Competition held yearly) held at Vasai’s Chimaji-appa Ground every winter. This helps the local taluka athletes grow and perform nationally and internationally.

So this marathon started with the concept of taking the same sporting efforts to next level and already the warm response of about 5000 to 10000 runner participants like previous year took active participation to run those odd 11 to 42 km marathon run race. Along with the sports, another motto of this race was to empower women with the main focus on ‘Saving Girl Child’ with other awareness like Keep Clean, Green and Pollution free city etc.

Year after years the passion of running has increased in Mumbai. With more and more people focusing on health and participating on yearly events like Mumbai Marathon and now this one. Citizens are seen practising for such races.

When it comes to Vasai virar location, the odd 40 and 21 km run along the 10 villages out of total about 56 brings the freshness world to the feet of participants. Most of the villages are full of lush greenery and winter being the bonus months ideal for runners. No pollution, just fresh air to get along the run with well maintained roads which are yearly enhanced for safety and directional needs of runners. People from all walks of life, be it young College goings, Senior citizens or a regular working Job or Business person everyone gets excited to run few km as possible. Their are also lots of spectators along every location in city and villages inside.

Beautiful fancy marathon concepts can be seen along the tracks that has lots of locals walking and running in various attires in groups, 3 of the major groups that were seen in previous years were a college group promoting ‘Nari Shakti’ (Women Empowerment) and other being ‘Save Nature, Grow Plans, Low Pollution’ and the third one being ‘Stop Girl Child Abortion’. This way the marathon gave quite a boost and awareness, along with health benefits of running and getting engaged in such social cause too.

Small kids in beautiful fancy attires, very old age seniors (women & men) in beautiful sports attire and those coming from far villages in that regular traditional clothes with participant number and other belts were seen in full enthusiastic mood. Cheer leaders from Mulji Mehta school with ‘band baja’ (Musical Instruments) cheering those runners were seen along with water facilities to help those runner cool down and get energized. This was seen all over the run race route.

Kshitij thakur (s/o Shri Hitendra Thakur), MLA of Virar Vasai taluka who was seen cheering the runners all along the way by getting into an open jeep and going around the route. Ambulance and other first aid facilities were handy in case someone withdraws or needs. Various news/press media were seen for the event with live coverage at Gujarati channel and more. This year also about 10 to 12 Medical emergency boots, Some odd 20 to 25 Water stations, ambulances in case emergency like cardiac arrest etc. Some professional medical staffs are ready to help keep health safety of participants.

Complete mayor’s marathon race is about 11 Km which starts at New Viva College in Virar (West) and below are routes. The Main Spots of the same are listed below from start to end nodes.

Runners can participate in Vasai Virar Full / Half and Other marathons by filling the application form Online or Offline according to the dates specified at official website. For offline forms they can visit VVMC ( Nagarpalika Municipal Office) located Near Virar Railway Station (East) or at Nalasopara, Vasai Palika Offices. Group registrations are also possible. Documents required with application forms are as :

The race of 2011 attraction was Pilavullakandi Thekkeparambil Usha (Famously Known P T Usha) from Kerala, the fast running legend of India. And this year it was ‘Sushil Kumar’ and a female sport champ ‘Shiny Wilson’ that represented India in Olympics this and previous years. We also found Ritesh Deshmukh and Milind Soman to cheer the crowd and run together. Also see the places of attractions around vasai and virar area.

Timings : 10 Am to 6 Pm, Monday to Saturday.
Facebook Updates : Page Created was not available when checked, So removed from here.
Yearly Updates : For updated information yearly, Always visit official website.